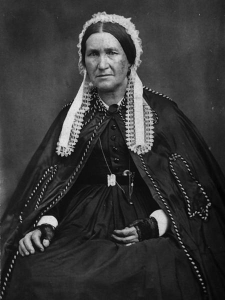 Join Lindsay for the primer series on Mormon Polygamy that will begin with the wives of Joseph Smith and eventually broaden to contemporary strains of the practice today. This episode deals with Presendia Huntington Buell.

‘Time’ magazine, January 17th 2014
‘It Makes Economic Sense for a Woman to Have More Than One Husband’
by Judith Warner

Barbara Ehrenreich: “When you say to women, to get out of poverty you should get married, my question to them is how many men (do) you have to marry. Marrying a $10 an hour man gets you nowhere, so you’d really have to marry three or four.”

Matriarchal societies have been limited to savage societies.

In a patriarchal society not only must the mother of the child be known, but the inseminator of the mother must be known too. Western Civilization was established by marriage which combined the role of the inseminator and the father into one man.

As we can see from ‘The Iliad’ and ‘The Odyssey’ of several thousand years ago, and other classical writings, it is true that Western Civilization was not only unique among civilizations in strictly forbidding any man from having more than one living wife, but also unique in allowing a woman to have up to two living husbands.

But the marrying of two husbands was largely limited to women from the highest income classes, not women from the lowest income classes, as Barbara Ehrenreich proposes. And Barbara Ehrenreich becomes completely lost when she proposes that a woman, high income or not, be allowed “to marry three or four” so-called “husbands”. Western Civilization has never allowed that, and indeed it is physically impossible for a woman “to marry three or four” so-called “husbands”.

Some genuinely nice stuff on this internet site, I like it.

I simply wanted to thank you very much all over again. I am not sure what I could possibly have taken care of without the tactics shared by you relating to such area of interest. It absolutely was the troublesome issue for me, nevertheless finding out the well-written strategy you handled it made me to leap over contentment. I am just happier for your assistance and wish you are aware of a powerful job your are providing teaching other individuals thru a web site. I know that you have never met any of us.

This is a topic which is near to my heart… Many thanks! Where are your contact details though?

Do you believe past life experiences? Do you think is reincarnation real?

Great article. I’m going through many of these issues as well..

Good post. I am dealing with some of these issues as well..

I absolutely love your website.. Great colors & theme. Did you develop this website yourself? Please reply back as I’m hoping to create my own blog and would love to find out where you got this from or just what the theme is named. Many thanks.

I would like to thank you for the efforts you have put in penning this blog. I really hope to view the same high-grade blog posts by you later on as well. In truth, your creative writing abilities has motivated me to get my own blog now 😉

Very good post. I am experiencing many of these issues as well..

Greetings! Very helpful advice within this article! It is the little changes that make the largest changes. Thanks a lot for sharing!

I’ve observed that in the world the present moment, video games are definitely the latest trend with children of all ages. There are occassions when it may be extremely hard to drag your son or daughter away from the games. If you want the best of both worlds, there are various educational video games for kids. Interesting post.

Excellent blog you have got here.. It’s difficult to find good quality writing like yours nowadays. I seriously appreciate individuals like you! Take care!!

Everything is very open with a very clear clarification of the issues. It was really informative. Your website is useful. Thank you for sharing.

A fascinating discussion is worth comment. I think that you should publish more on this subject, it may not be a taboo subject but generally folks don’t discuss these issues. To the next! All the best.

Way cool! Some very valid points! I appreciate you penning this write-up plus the rest of the site is really good.

Everything is very open with a really clear description of the issues. It was really informative. Your website is very useful. Thanks for sharing.

I’m excited to discover this web site. I want to to thank you for ones time just for this wonderful read!! I definitely savored every little bit of it and I have you saved as a favorite to look at new information in your site.

Having read this I believed it was rather informative. I appreciate you spending some time and energy to put this information together. I once again find myself personally spending a significant amount of time both reading and leaving comments. But so what, it was still worth it!

It’s difficult to find knowledgeable people in this particular topic, however, you sound like you know what you’re talking about! Thanks

This website definitely has all the information and facts I needed concerning this subject and didn’t know who to ask.

Having read this I thought it was extremely informative. I appreciate you spending some time and effort to put this short article together. I once again find myself spending way too much time both reading and leaving comments. But so what, it was still worth it!

FreeSpinner is designed to assist you to attract the visitors on your site.

After checking out a few of the blog articles on your web site, I seriously appreciate your technique of writing a blog. I saved it to my bookmark website list and will be checking back in the near future. Take a look at my web site too and tell me your opinion.

The next time I read a blog, I hope that it doesn’t fail me just as much as this particular one. After all, Yes, it was my choice to read through, however I genuinely believed you would have something interesting to talk about. All I hear is a bunch of moaning about something you can fix if you weren’t too busy searching for attention.

That is a really good tip especially to those fresh to the blogosphere. Simple but very precise information… Thank you for sharing this one. A must read article.

This is a topic that’s close to my heart… Many thanks! Exactly where are your contact details though?

The next time I read a blog, I hope that it won’t disappoint me just as much as this particular one. After all, I know it was my choice to read, but I truly thought you would have something helpful to talk about. All I hear is a bunch of whining about something you can fix if you were not too busy searching for attention.

I’m amazed, I have to admit. Seldom do I come across a blog that’s equally educative and interesting, and let me tell you, you have hit the nail on the head. The problem is an issue that not enough people are speaking intelligently about. Now i’m very happy I came across this in my search for something regarding this.

Way cool! Some very valid points! I appreciate you penning this article and also the rest of the website is also really good.

That is a good tip particularly to those fresh to the blogosphere. Short but very precise information… Thanks for sharing this one. A must read article.

Your style is unique in comparison to other folks I have read stuff from. Many thanks for posting when you have the opportunity, Guess I will just bookmark this web site.

Howdy! This blog post couldn’t be written much better! Looking at this post reminds me of my previous roommate! He constantly kept talking about this. I will forward this post to him. Fairly certain he’s going to have a very good read. Thank you for sharing!

Way cool! Some extremely valid points! I appreciate you penning this article plus the rest of the website is really good.

Having read this I believed it was very informative. I appreciate you finding the time and effort to put this information together. I once again find myself spending a significant amount of time both reading and posting comments. But so what, it was still worth it!

You need to be a part of a contest for one of the finest sites on the net. I’m going to recommend this site!