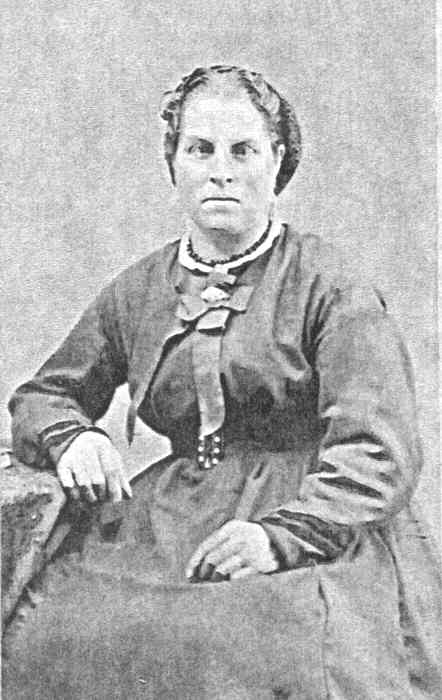 
When the soldiers arrived about noon the next day, the commanding officer didn’t seem surprised to find John absent. The captain just shook his head and asked the three of us who were outside if we knew why the army wanted to arrest our husband. When we didn’t answer, he said, “John D. Lee is a murderer.”

He went on to tell us that John’s Mormon Militia and Indian allies had slaughtered over 120 unarmed men, women and children. He said they had killed almost everyone in a wagon train that was passing through southern Utah on the way to California.

He asked us if we were proud of the way John had participated in the bloodbath at Mountain Meadows, and of the way the head of our household and his cohorts had slaughtered everyone except the tiniest of their children. . . .

That was it. I couldn’t listen to any more of the government man’s hateful lies. I turned and made my way down to the creek as fast as my pregnant belly would allow. When I got there, I bent over and splashed water on my face over and over again. I wanted the water to wash away the memory of what I had just heard. But it didn’t.

My distress turned into dizziness, which made me fall on a jagged rock and bruise my unborn baby. John came back and comforted me after I gave birth to a stillborn son a month later.

Hello, very interesting podcast. It seems life on the handcarts was not what LDS have traditionally thought about. I am curious where I could find out about John D Lee’s sexual habit u mentioned.. I bought Mountain Meadows (Brooks) and John D Lee (brooks) What was fascinating was the picture of him sitting on the edge of his coffin.

I just found out I am a decedent of Emma Lee French. The family version of how she met John was a bit different. According to my Grandma she “Threw herself at John and begged her to marry her.” When I mentioned to my Grandma that John D Lee wasn’t a very good man she defended him in every way. Then she said to me….I have an article for you I clipped from the Deseret News about the downtown get together and “that girl” who wants the priesthood. I told her no need to give it to me, I was there. LOL!

Allyson, What is your link to Emma Batchelor Lee French? I am the grandson of her son William.

I have been doing an article on Emma for the last 5mos.
Her great grandson gave us this story.
She was an amazing woman.

Hi love listening to these. You said this was going to be a multi part series discussing John D Lees wives. I’ve been trying to find the other episode. Can you let me know which it is? Fascinating stuff! Thank you for doing this series!

I am a descendant of Rachel; however, I lived near near what was their property in the Winslow/ Holbrook area. I’d like to verify that. 10 years ago the house that Emma and Frank French lived in. was still mostly standing. I don’t know now since I’ve moved.

Precisely what I was looking for, thanks for putting up.

I will right away snatch your rss feed as I can not find your e-mail subscription link or e-newsletter service. Do you have any? Kindly allow me understand so that I may subscribe. Thanks.

Hey, you used to write excellent, but the last few posts have been kinda boring¡K I miss your super writings. Past few posts are just a little out of track! come on!

I’m sure we have a trouble with your blog working with Firefox internet browser.

This website truly has all the information I wanted concerning this subject and didn’t know who to ask.

I blog often and I really thank you for your information. Your article has truly peaked my interest. I am going to bookmark your site and keep checking for new information about once a week. I opted in for your Feed too.

I’m impressed, I have to admit. Seldom do I come across a blog that’s both educative and amusing, and let me tell you, you’ve hit the nail on the head. The issue is something which not enough men and women are speaking intelligently about. I’m very happy that I stumbled across this during my hunt for something relating to this.

Having read this I thought it was very informative. I appreciate you finding the time and energy to put this article together. I once again find myself spending a lot of time both reading and leaving comments. But so what, it was still worth it.

Do you believe past lives? Do you think is reincarnation real?

An interesting discussion is definitely worth comment. I do think that you ought to publish more on this subject matter, it might not be a taboo subject but generally people do not discuss these issues. To the next! Cheers.

Next time I read a blog, I hope that it doesn’t fail me as much as this one. I mean, I know it was my choice to read through, but I genuinely thought you would probably have something interesting to say. All I hear is a bunch of crying about something you could possibly fix if you weren’t too busy looking for attention.

I have realized some significant things through your site post. One other subject I would like to say is that there are plenty of games on the market designed mainly for preschool age young children. They include pattern recognition, colors, wildlife, and shapes. These commonly focus on familiarization rather than memorization. This helps to keep children occupied without sensing like they are studying. Thanks

Can I simply just say what a relief to find somebody that actually knows what they are talking about on the net. You definitely know how to bring a problem to light and make it important. A lot more people should check this out and understand this side of the story. It’s surprising you are not more popular given that you most certainly possess the gift.

Excellent post. I am experiencing a few of these issues as well..

Your style is really unique compared to other people I have read stuff from. I appreciate you for posting when you’ve got the opportunity, Guess I will just book mark this site.

I have to thank you for the efforts you have put in penning this blog. I really hope to check out the same high-grade content by you later on as well. In fact, your creative writing abilities has motivated me to get my very own blog now 😉

Great information. Lucky me I discovered your site by accident (stumbleupon). I have book marked it for later.

Truly insightful points that you have said, thanks so much for submitting.

Pretty! This has been an incredibly wonderful post. Thank you for supplying this info.

I really desire to reveal to you that I am new to online blogging and very much admired your review. Quite possibly I am likely to remember your blog post . You definitely have stunning article blog posts. Get Pleasure From it for telling with us your very own internet webpage

Greate article. Keep posting such kind of information on your page.

Im really impressed by it.
Hey there, You have performed a great job.

I’ll definitely digg it and personally suggest to
my friends. I am sure they will be benefited from
this web site.