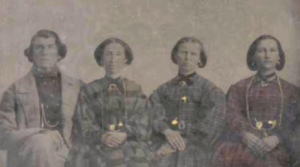 Join Lindsay as she hosts a sermon given by Brigham Young, delivered by actor Micah Nickolaisen.   Link to the sermon: