Episode 135: A Blessing, a Confirmation 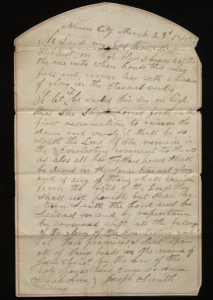 Join Lindsay as she interviews American historian Ben Park who talks about the exciting and shocking confirmation of Joseph Smith’s polygamy found in a blessing given to Sarah Ann Whitney by Joseph Smith and written in his own hand.

Links mentioned and read in this podcast:

Talk about chasing your tail.
This whole podcast is ridiculously fabricated by the Young era, as well as this modern era that seeks to continue the fabrication. You use the terms possibly, or not original docs, arguably, etc.

Wait. do you agree with those docs that are saying Jesus dad was a Roman soldier. (not God)
Or how about the researchers saying that Jesus was married?
Wow. Your built up dramatization is of Hollywood proportions, all be it of the Kardashian type.

I’m not sure what you mean by the “Young Era,” but I thought this podcast was another great one on this site, bringing data and evidence from several trusted places including the LDS Church’s Joseph Smith Papers Project. I makes me consider the similarities of the use of the use of power by people like Joseph Smith and Harvey Weinstein.

As the headlines have unfolded about the allegations of Harvey Weinstein and his sexual harassment or assault of young Hollywood actresses in our day, I have wondered about how Joseph Smith approached his use of power and the introduction of polygamy as a Young Prophet of the newly established Mormon Church in the 1830’s and early 1840’s.

Both men promised young girls something that was beyond their reach to obtain on their own. Break-through parts in film opportunities with potential for large sums of money and celebrity, or salvation for themselves and their families. In the end, I don’t see any difference.

Thanks Lindsay for your great podcasts and guest historians that shed light on so many interesting stories about our Mormon beginnings!

How wonderful that we have a WRITTEN physical document in Joseph Smith’s handwriting indicating his plural marriage to Sarah Ann Whitney. Later she is “sealed” for time only to Heber C. Kimball under the Levirate Law of Marriage wherein the adopted sealed sons of Joseph Smith take Joseph’s wives to raise up seed up unto Joseph Smith. It was this doctrinal understanding that was at the foundation of Heber J. Grant’s claim that he is the son of Joseph Smith. Isn’t it interesting that there is so much “prejudice” and “persecution” against those who live the Principle of Plural Marriage, as a sacred religious principle of which many of us have a fervent and passionate testimony. Yet, there is a societal demand that we respect those who are of the LGBTQ knowing what the Scriptures have to say about homosexuals. We LOL to see the obvious dichotomy and realize that prophesies are being now fulfilled.

What i do not realize is in fact how you are now not actually a lot more neatly-appreciated than you might be now. You are very intelligent. You already know therefore significantly relating to this subject, made me in my view believe it from so many varied angles. Its like women and men are not involved unless it?¦s something to accomplish with Lady gaga! Your individual stuffs nice. At all times maintain it up!

I like this weblog very much so much great information.

Hiya, I’m really glad I have found this info. Today bloggers publish only about gossips and internet and this is actually frustrating. A good web site with exciting content, this is what I need. Thanks for keeping this website, I will be visiting it. Do you do newsletters? Cant find it.

Good info. Lucky me I reach on your website by accident, I bookmarked it.

It’s a comic book movie that stands out from a lot that have come before, and is a genuinely entertaining movie on all accounts.

While the film may be intriguing on the surface, the final verdict is that the film is lacking the depth of the films it may remind you of but may still be worth a look if you’re a fan of R-rated action comedies.

Greetings! Very useful advice in this particular article! It is the little changes that produce the biggest changes. Thanks for sharing!

Very good post! We are linking to this great article on our website. Keep up the good writing.

I’m impressed, I have to admit. Seldom do I come across a blog that’s both educative and interesting, and without a doubt, you’ve hit the nail on the head. The problem is something not enough men and women are speaking intelligently about. I’m very happy that I came across this during my search for something regarding this.

I absolutely love your blog.. Great colors & theme. Did you create this site yourself? Please reply back as I’m looking to create my own blog and would love to find out where you got this from or exactly what the theme is named. Thanks.

Do you believe in your past life? Do you think is reincarnation real?

This blog was… how do I say it? Relevant!! Finally I have found something that helped me. Many thanks!

I have discovered some considerations through your website post. One other point I would like to convey is that there are several games in the marketplace designed specially for preschool age children. They contain pattern recognition, colors, creatures, and forms. These typically focus on familiarization instead of memorization. This helps to keep children engaged without feeling like they are studying. Thanks

There’s definately much to find out about this subject.
I adore all of the points you may have made.

Take a look at my web page :: IlonaVSina

Spot on with this write-up, I honestly believe that this website needs much more attention. I’ll probably be back again to read through more, thanks for the information!

I’d like to thank you for the efforts you have put in penning this blog. I’m hoping to check out the same high-grade content from you later on as well. In truth, your creative writing abilities has inspired me to get my own, personal site now 😉

I absolutely love your website.. Excellent colors & theme. Did you make this website yourself? Please reply back as I’m wanting to create my own website and would like to learn where you got this from or just what the theme is called. Appreciate it.

You made some decent points there. I looked on the web for additional information about the issue and found most people will go along with your views on this web site.

Good post. I learn something new and challenging on websites I stumbleupon everyday. It’s always helpful to read content from other writers and practice something from their web sites.

That is a good tip especially to those new to the blogosphere. Short but very accurate info… Thanks for sharing this one. A must read post.

Generally I don’t learn post on blogs, but I would like to say that this write-up very pressured me to try and do it!

Your writing style has been amazed me. Thank you, very great post.

Having read this I thought it was really informative. I appreciate you spending some time and effort to put this information together. I once again find myself personally spending a lot of time both reading and commenting. But so what, it was still worthwhile!

FreeSpinner is designed to assist you with writting all the text that you need.

I was recommended this blog through my cousin. I am not sure whether or not this put
up is written by means of him as no one else realize
such particular about my trouble. You’re incredible!
Thanks!

If some one desires expert view on the topic of blogging and
site-building then i propose him/her to go to see this web site, Keep up the fastidious job.

I’m amazed, I have to admit. Rarely do I come across a blog that’s both equally educative and engaging, and let me tell you, you have hit the nail on the head. The problem is something which not enough men and women are speaking intelligently about. I am very happy I found this during my search for something regarding this.

After going over a handful of the blog posts on your website, I truly like your technique of writing a blog. I saved it to my bookmark site list and will be checking back soon. Please visit my website as well and let me know how you feel.