Living Under the Banner

Hulu’s new limited television series, Under the Banner of Heaven depicts a fictionalized version of the tragic revenge killings of Brenda Wright Lafferty and her baby Erica Lafferty at the hands of radicalized LDS fundamentalist family members. The true-crime story, based on the book of the same name and written by Mormon Oscar winner Dustin Lance Black, is set in a universe of multiples Mormonisms. It is a province whose intersections I know well, as the podcast has shown. My interactions with and extensive knowledge of Mormon fundamentalism, living 33 years as a devout Latter-day Saint coupled with running a Mormon-studies open forum since 2014, and my involvement on several ongoing film projects, positioned me as one of the cultural and historical consultants for the series. Troy Williams, the show’s other cultural consultant is also acutely qualified in his role because of his experience with Mormonism, fundamentalism and film production.

The series is understandably bringing up a lot of complicated feelings for just about anyone with a relationship to Mormonism. From mainstream members of the Church of Jesus Christ of Latter-day Saints, to Mormon fundamentalists, exmormons, religious scholars, writers, influencers and everything in between, the series is triggering mixed reactions and responses. This is what trauma processed in community looks like. Dustin Lance Black‘s writing has incised the boil of fundamentalist patriarchy, in a church that has long upheld, valued and perpetuated the patriarchal order. The process is not clean, or pretty or easy.

For better or worse, the show is spurring a conversation and providing a spotlight into the larger Mormon diaspora. The series is not the end sentence but a thesis with an unresolved finish. The blog series, “Living Under the Banner,” is inspired by the countless stories of women and others who identify with the characters portrayed in the Hulu show, which informed my research on my many projects. It’s aimed to further the conversation and add texture to the portrayals seen in the show.

The story reflected in Brenda’s character arc in the television show is one of two stories I hear often: LDS women who marry into fundamentalist patriarchal families or LDS women that grow up in them. While most mainstream Latter-day Saints are quick and persistent to distinguish their branch of Mormonism from more radical sects, few realize how those sects are usually, and almost exclusively seeded within LDS wards and communities. As reactions to the show are beginning to surface, these denials are as ardent as they are predictable.

I’ve spoken to thousands of Mormon women through the Year of Polygamy project about their experiences. They are not unfamiliar with such denials. These themes of fundamentalist patriarchy are persistent; lingering beyond 1984 and into today. A common heartache throbs in the veins of many Mormon women and girls who survive the weight of it. Too many depended and trusted their community to honor promises that righteous adherence offered protection and when it failed them, or worse helped enable their suffering, it stings with betrayal. I’d like to believe the collective Mormon apathy and dismissals are rooted in shame, rather than cruelty.

The show is picking at old wounds and some responses are creating new ones. Most hauntingly, many current LDS women feel that their experiences are again being dismissed and ignored within their own faith community as viewers react and try to distance themselves from the portrayals they see on screen. “I do not see myself in this narrative,” is a common refrain triggered by the series. As a consultant, my defense against that statement is not about defending my work. My experience with this subject is clear and heavily documented. I don’t need twitter hot takes to validate something I understand on a bone level. But this blog series is a response to the frustration that the defensiveness has sparked within the Mormon/LDS community. Most especially it is a rejected invitation from the people that need it most. This response ignores the stories of so many people who do see themselves reflected accurately in the portrayals.

Although the show might not resonate with every single Latter-day Saint, too often it powerfully reverberates with many and that should count significantly. “If ye are not one, ye are not mine,” and yet… the sea of people that have reached out to me to share their own Under the Banner of Heaven stories are continued to be explained out of their own lives and stories. Many hope to utilize this moment to speak to their experience and have their voices heard.

No matter how much we seek to bury the truth of the complexities and diversity within our culture, they remain. This blog series is an effort to remind us of that. May we listen before we disregard, may we change in spite of the pride and grief that comes with realizing how much work we all have to do.

If you would like to submit your own 3,000 word or less story, please send an email with a short bio to yearofpolygamy@gmail.com for consideration.

CLICK ON THE NAMES BELOW TO READ THE STORIES OF REAL MORMON WOMEN TELLING THEIR STORIES:

MORE STORIES OF PEOPLE LIVING UNDER THE BANNER: 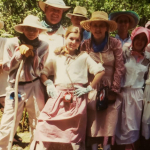 Living Under the Banner